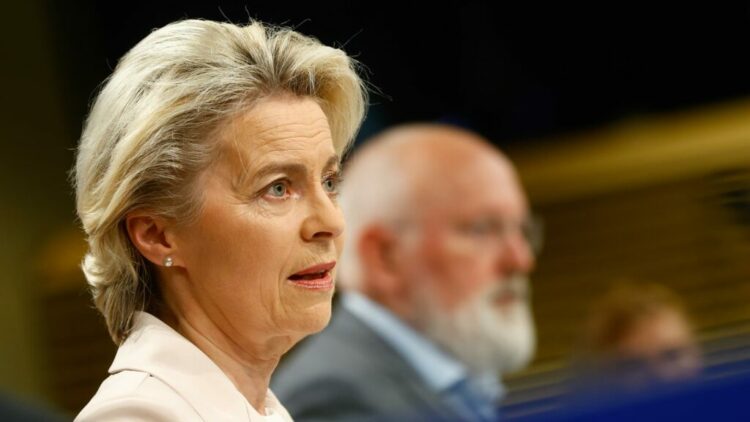 The European Comission has proposed in Brussels this Wednesday that the countries of the European Union reduce their gas consumption by 15% between August 1 and March 31, 2023 with savings measures in households, companies and the public sector to prepare for a possible cut in supply by Russia.

The plan, dubbed “Save gas for a safe winter“, calls on governments to launch campaigns so that households lower the thermostata limit heating or air conditioning in public buildings and give incentives industry to use alternative fuels where possible or reduce gas consumption.

These actions should help meet the 15% reduction target with respect to the average consumption of the same period during the last five years, which, for the time being, is voluntary for the States.

However, the regulation proposed by the Community Executive provides that the Commission can impose mandatory gas demand reduction goals if it declares an “alert” on the security of supply throughout the Union, what would happen when a serious risk of shortage or exceptionally high demand for gas is detected.

The brussels contingency plan comes when the flow of Russian gas to the EU already reduced by 30% compared to the 2016-2021 average, partly due to the “unjustified” and “unilateral” actions of Gazprom, which has totally or partially interrupted supply to twelve EU countries.

“The recent escalation of gas supply disruptions from Russia point to a important risk that a complete and prolonged interruption of the supply of Russian gas could materialize abruptly and unilaterally”, points out the Commission, which calls for immediate action.

Act now, argues the Commission, would reduce the impact of a total cut on European GDP by at least a thirdcausing a fall of 0.4% instead of the decrease of between 0.6% and 1% that it estimates if the saving measures are postponed, would reassure the markets and smooth out the volatility of prices.

Brussels calls for giving priority to cleaner energies when replacing gas, but admits that it might be necessary to resort to coal, oil or nuclear.

With the 15% reduction in mind, Brussels has drawn up a Gas Demand Reduction Plan which focuses on replacing this fuel with other energy sources, reducing consumption in all sectors and, at the same time, ensuring that supply to homes and essential users such as hospitals or industries that are essential to the European economy is guaranteed.

“Before considering restrictions (in the supply) the States should exhaust all the possibilities of substitution, the voluntary saving schemes and alternative energy sources“, said the Community Executive in the statement.

The Brussels Plan to save energy

Brussels calls prioritize renewable or cleaner energy when it comes to replacing gas with another fuel, but recognizes that it may be necessary to resort to coal, oil or nuclear energy “as a temporary measure”, something that some countries have already done.

It also calls on States to consider incentives to the reduction of energy consumption in industry, for example, launching auctions or tenders to compensate for a certain reduction or through public aid, for which it has amended its State aid rules.

Another “important pillar” of savings will be heating and cooling systemsaccording to the Brussels plan, which suggests setting limits on the temperature that can be reached in public buildings, although the final proposal avoids setting specific thresholds that had been considered in the initial drafts.

The regulation and consumption reduction plan they will now have to be discussed and approved by the Member States.