The High Representative of the European Union for Foreign Affairs and Security Policy, Josep Borrell, explained in a telephone conversation with the Iranian Foreign Minister, Hosein Amirabdolahian, that the decision of the European Parliament to designate the Revolutionary Guard as a terrorist organization is a non-binding expression of Europe’s concerns about the current situation of Human Rights in Iran.

In the conversation, the Iranian minister conveyed his deep criticism of the European Parliament resolution, which he described as “emotional, cruel and lacking in professionalism”, as well as “contrary to reason and civility”, according to a summary of the conversation published by the Iranian Foreign Ministry on its website.

The dialogue takes place after the European Parliament adopted a resolution in which it described the Iranian Revolutionary Guard as a terrorist group for alleged violations of Human Rights during the recent riots in the country. The measure was approved on Wednesday by almost the entire Eurochamber with 598 votes in favour, 31 abstentions and nine votes against.

“We have repeatedly said that the Islamic Revolution Guard Corps is an official and sovereign institution, which has played and continues to play a vital and important role in providing security for Iran and the region, especially in the fight against terrorism. “, said the Iranian minister, before adding that the EP’s decision is a “shot in the foot of Europe”.

Amirabdolahian advanced a “lawful and firm” response from Iran’s Islamic Consultative Assembly (Parliament) before asking the European Parliament to “reflect on the negative repercussions” of its decision.

“In the world of diplomacy, it is necessary to respect mutual security and put the promotion of mutual trust on the agenda instead of resorting to a language of threats and hostile measures. In any case, there will be a reaction and a response,” has indicated.

Thus, Borrell chose to focus on the diplomatic process during the difficult talks for Iran’s return to the international nuclear agreement. In this regard, the top European diplomat expressed his satisfaction at the news of cooperation between Iran and the International Atomic Energy Agency (IAEA). 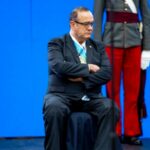