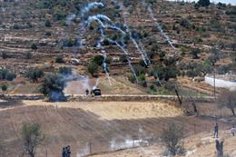 Two people have died and another nine have been injured by bullets, one of them seriously, this Saturday in an operation by the Israeli Army in the city of Nablus, in the north of the West Bank.

The director of the Palestinian Red Crescent ambulance service, Ahmed Jibril, has indicated in the early hours of Sunday that one of the victims has been seriously injured in the head, according to the Palestinian news agency WAFA.

At dawn, the Israeli Armed Forces have reported that they were carrying out an “operation” in the city of Nablus, which was resulting in an “exchange of fire between armed men and agents”.

For their part, no injuries to Israeli troops have been reported, according to The Times of Israel newspaper.

The purpose of the operation has not been clarified by the Israeli Armed Forces, but reports collected by ‘The Jerusalem Post’ indicate that the target may be a leader of the al-Aqsa Martyrs Brigade.

The target of the Israeli agents would be Ibrahim al-Nablusi, the only survivor “of a terrorist cell annihilated in February”. However, the aforementioned media have reported that said objective would have escaped.

Is the Iberian Peninsula advancing towards its desertification due to human beings?