At least seven people have been injured by two simultaneous explosions in the city of Jammu, in the capital of Indian Kashmir, ahead of a controversial opposition march against the country’s Prime Minister, Narendra Modi.

The Bharat Jodo Yatra movement, championed by the former president of the Indian National Congress, Rahul Gandhi, is located about 60 kilometers from the city, which has been on alert for days.

Gandhi, still with enormous influence over the party, which is now led by his mother, Sonia, blames the ultranationalist prime minister for a long list of negligence at the head of the Indian government, from acts of waste to permissiveness with violence against women, passing by rising fuel prices and rising unemployment.

The march is the prelude to a campaign against Modi and his Indian People’s Party that will begin on January 26 ahead of the string of local elections that will begin next month.

At the moment there is no information on the nature of the explosions, according to police sources to the ‘Hindustan Times’.

One of the injured is in critical condition and the entire area is cordoned off, according to authorities. 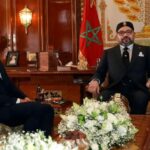