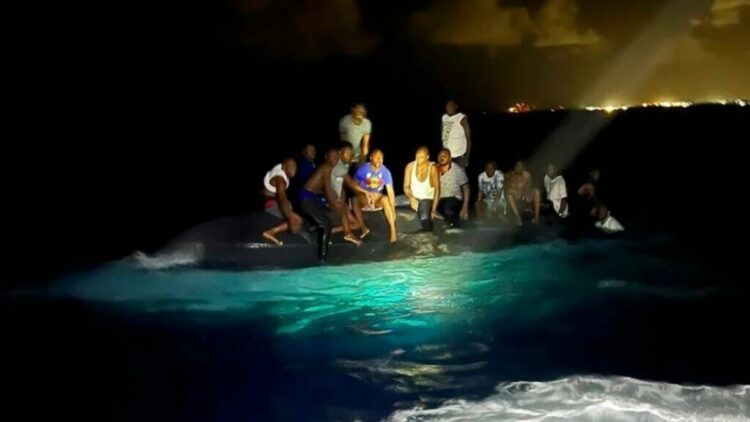 At least 17 Haitian migrants died this Sunday off the coast of the Bahamas, after the boat they were traveling in capsized. Another 25 people who were traveling in the same boat were rescued alive. Authorities said the citizens were moving to the United States to flee gang violence, political crisis and poverty in Haiti while investigating possible human smuggling.

The Prime Minister of the Bahamas, Philip Davis, offered details of the lifeless people rescued from the water at a press conference. “Unfortunately, we could see that there were 17 people that were taken out, all deceased. In those numbers, there are 16 women and unfortunately, a small child between four and five years old,” Davis said.

Davis described what happened as a “tragedy” and assured that an investigation is currently being carried out by various agencies to determine the circumstances surrounding the incident, which they presume is the product of a possible human smuggling operation.

A multi-agency investigation is underway to determine the full circumstances surrounding a suspected human smuggling operation which has resulted in the deaths of Haitian migrants.

He also reported that the overturning happened around one in the morning.

“The Royal Bahamas Police Force, Royal Bahamas Defense Force, responded to reports of a boating incident seven miles from New Providence just after 1am (0500 GMT) on Sunday, July 24, 2022. A rescue operation was immediately carried out. They recovered 17 bodies from the water,” the minister said.

Preliminary investigations indicate that approximately 60 people were on the boat, which is why the authorities presume that there are several missing persons. In fact, they continue with the search and recovery efforts.

For his part, the Attorney General of the government of the Bahamas, Ryan Pinder, reported that there are two Bahamians detained and that an investigation is being carried out on them.

“We will wait and see the final reports of the investigation from the law enforcement team. To the extent that those investigations reveal criminal guilt, there will be no resistance on the part of the Bahamian government to take the necessary criminal action and enforcement of the law.” criminal law against those who deserve it,” said the attorney general.

Haiti is going through a difficult situation of violence due to the war between gangs that broke out on July 7, so citizens choose to flee the country, using the route of the Bahamas, the most common to reach the United States.

According to the most recent report by the Human Rights Watch organization, from now until last Friday, 300 people have been killed, of which 21 were burned and 16 are missing.

According to the National Network for the Defense of Human Rights “the gangs also burned houses and used heavy vehicles to demolish them, 125 houses were destroyed.”

A week ago, the United Nations Security Council voted unanimously to put a ban on arms sales in Haiti. Prior to this, the UN approved the continuation of the presence of the organization’s peacekeepers on the ground.

The Prime Minister of the Bahamas expressed his support for the conflict taking place in Haiti to be resolved internally and without intervention.

“Our Caricom position has always been that the solution has to be a Haitian solution rather than an imposed solution. That remains our position and we will be participating very soon in trying to unite the factions. At the moment, it’s just gang wars. It is a failed state. And efforts to unite the warring parties, and I mean gang leaders, are underway as I speak.”

The crisis has worsened in recent days due to protests by citizens demanding power cuts, fuel shortages and the creation of mafias that sell fuel at more than double the official price.

The difficult situation in the country became even more acute after the assassination of President Jovenel Moise by suspected mercenaries last year.

With information from EFE, AP and AFP.

A new mod in Zelda: Breath Of The Wild adds split-screen multiplayer