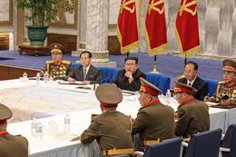 Top South Korean and U.S. chief negotiators have met in Indonesia to coordinate a response to North Korea’s missile-testing and nuclear program after Seoul advanced a “bold” offer to persuade Pyongyang to abandon its ambitions in this direction.

The meeting came about two weeks after they met on the sidelines of a Group of 20 (G-20) foreign ministers meeting on the Indonesian island of Bali.

The meeting comes after South Korean media revealed that South Korean President Yoon Suk Yeol has asked the Unification Ministry to prepare a “bold plan” to revive North Korea’s economy if it agrees to a plan. of denuclearization and put an end to its constant testing of long-range missiles and projectiles.

Deputy presidential spokesman Lee Jae Myung has conveyed that the president hopes to begin consultations with relevant agencies as soon as possible and make preparations for a “realistic offer” to Pyongyang.

The president has emphasized a humanitarian, cultural and sports exchange program with North Korea to restore relations between the two countries, reports the official South Korean news agency Yonhap.

“This bold plan,” added a Unification Ministry official, speaking on condition of anonymity, “will not only include economic assistance, but also address the security issue, about which North Korea has expressed concern.”

The minister, Kwon Young Se, has added that his portfolio will seek a “gradual and simultaneous implementation” of the agreements instead of betting on a maximalist approach.

Among the measures being considered is the possibility that South Korea admits the broadcast of North Korean television within its borders to restore “national homogeneity”, the Ministry added, as well as the creation of an agency for Human Rights.

Pokémon UNITE user? These 2 new gift codes are for you

The controversy Twitter-Musk has moved the actions of Tesla