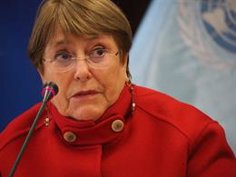 The United Nations High Commissioner for Human Rights, Michelle Bachelet, released this Wednesday a long-awaited report on the alleged violations that the Chinese Government would have committed against the Uyghur minority in the Xinjiang region, a week after she recognized pressure from Beijing to prevent the publication of said document.

In its 48 pages, the UN report highlights the “credible” evidence of human rights violations that China would have carried out in Xinjiang against the minority of Muslim confession.

Specifically, this report – which has been in preparation for three years – ensures that “serious violations of Human Rights” have been committed in the context of the application of anti-terrorist strategies and against “extremism” approved by the Government. Chinese in 2014.

“Implementation of these strategies and associated policies in the Xinjiang Special Administrative Region has resulted in
severe and undue restrictions on a wide range of human rights,” reads the document shared by Bachelet.

“These restrictions patterns are characterized by a discriminatory component, since the underlying acts often directly or indirectly affect Uyghurs and other predominantly Muslim communities,” it adds.

The UN High Commissioner for Human Rights has described China’s anti-terrorist strategies in the region as “deeply problematic” from the point of view of international standards, since it would contain “vague, broad and open concepts that leave great discretion to officials to interpret and apply broad powers of investigation, prevention and coercion”.

Furthermore, “in a context of limited guarantees and little independent supervision”, such a framework would have led in practice
to the large-scale arbitrary deprivation of liberty of members of the Uyghur community and other predominantly Muslim communities in Xinjiang in VETCs (so-called vocational education and training centres).

In the VETC, detention centers where the Chinese regime “reeducates” Uyghurs, “an arbitrary detention system with patterns of abuse” would be exemplified, according to the report.

“The treatment of people held in the so-called VETC system is equally concerning. Allegations of patterns of torture or ill-treatment, including forced medical treatment and adverse conditions of detention, are credible, as are reports of incidents individual cases of sexual and gender-based violence”, he argues.

The United Nations document also denounces violations of reproductive rights through the discriminatory application and forced obligation to carry out family planning and birth control policies.

Restrictions have also been placed on
religious identity and expression, as well as the right to privacy and free movement.

“Furthermore, there is evidence that work and employment schemes for purported purposes of poverty alleviation and prevention of ‘extremism’, including those related to the VET system, may involve elements of coercion and discrimination on the grounds of religious and ethnic,” the report adds.

This report has been published a week after Bachelet denounced pressure for the imminent publication of the document, receiving a letter signed by 40 countries and whose name the High Commissioner did not want to reveal.

“I have been under tremendous pressure. But I will not withhold publication because of it,” Bachelet explained, adding that her office is working for the text to be finished by the end of August, as it has finally been.

Bachelet visited Xinjiang and other Chinese regions last May. During the visit, he refrained from criticizing Beijing’s policies in the region, which drew criticism from many countries for its ambiguity regarding human rights violations in the region.

The United Nations rapporteur Tomoya Obokata considered in August “reasonable” the denunciations of international organizations about forced labor and the repression against ethnic minorities in the Asian giant.

Obokata explained that it was “reasonable” to conclude that Uyghurs, Kazakhs and other ethnic minorities have repeatedly experienced forced labor in sectors such as agriculture and manufacturing.

The Chinese authorities have launched a series of measures in the Xinjiang region that have caused friction between the Asian giant and the international community, especially the United States, which has come to accuse Beijing of committing human rights violations and even genocide. against the Uighur population.

Tom Hanks surprised his fans with a new project