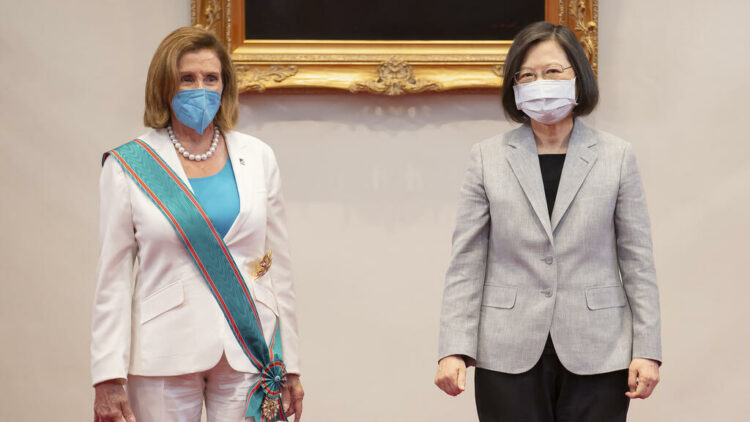 US House Speaker Nancy Pelosi arrived in Taiwan on Tuesday. China is exasperated by the visit to this democratic archipelago of 24 million inhabitants that it claims as its own and intends to isolate at all costs. Beijing has already launched a series of military and economic retaliation.

Since her arrival, Nancy Pelosi tries to put cold cloths. She has maintained the same line of defense, that is, that this visit does not change the US position regarding Taiwan, remembering that a similar visit already took place in 1997, reports our correspondent in Taiwan, Adrien Simorre.

That said, Nancy Pelosi made a series of high-level visits on Wednesday morning. First to the Taiwanese Parliament, a symbol of Taiwanese democracy, and a little later to the presidential palace, where she met Tsai Ing-wen, the Taiwanese president. “We have come to make it clear that we will not abandon Taiwan,” Nancy Pelosi said during the meeting. “We come as friends, we thank you for your leadership, we want the world to recognize you. Our visits to congressional delegations have three objectives. The first is security, the security of our people, global security; the second is the economy, to spread the greatest possible prosperity; and the third is governance,” he said.

Nancy Pelosi is scheduled to meet with the president of TSMC, the world’s leading semiconductor company. Partnerships between the US and Taiwan in this very strategic sector should be on the agenda.

This visit provoked the anger of Beijing, which does not recognize the sovereignty of the archipelago. China had announced severe military retaliation if the visit took place. And it has already launched a campaign of economic sanctions on Tuesday, but also of cyberattacks on Taiwanese computers. Following the arrival of Nancy Pelosi, the Chinese Foreign Ministry denounced a serious violation of US commitments to China, seriously undermining regional peace and stability. The Chinese government vigorously protested to the US ambassador, who was summoned to Beijing, and warned of the “very serious consequences” of a measure considered “extremely shocking.”

Chinese Foreign Minister Wang Yi warned on Wednesday that “those who offend” his country will be “punished.”

“This is a complete farce. The US violates China’s sovereignty under the guise of so-called ‘democracy’… those who offend China will be punished,” Wang said on the sidelines of a meeting of the Association of Southeast Asian Nations. (ASEAN) in Phnom Penh.

However, for the time being the threats from Chinese propaganda have not materialized as announced, which at one point led to the belief in the possibility of a direct military intervention. But the worst is yet to come. The People’s Liberation Army will hold military exercises at sea and in the air around Taiwan from Thursday to Sunday. Some of these exercises may even take place within Taiwanese territorial waters. Therefore, the next few days will be very tense around Taiwan.

“These military intimidations are aimed at undermining the morale of our citizens,” the Taiwanese government denounced. Therefore, the next few days will be very tense around Taiwan. If China does indeed enter Taiwanese territory, the army may be forced to open fire. However, according to Taiwanese military experts, the risk of confrontation is minimal.

The possible large-scale maneuvers are already provoking numerous reactions in the region. As South Korea calls for calm and dialogue, the Japanese government is concerned about selective military action promised by Beijing. North Korea, for its part, supports China and denounces, with this visit, the “unchaste interference” of the United States. The consequences of this visit are still difficult to measure.