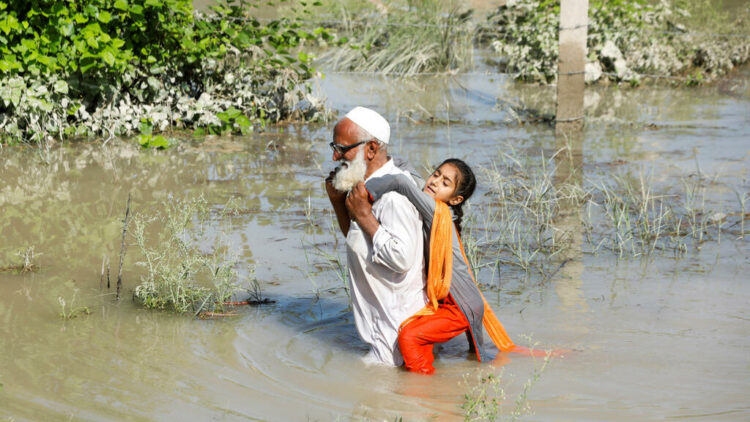 The Pakistani Prime Minister estimates that his country will need at least 10,000 million dollars to rebuild the areas affected by the consequences of the monsoon rains. Pakistan, responsible for 1% of greenhouse gas emissions, pays a high price for climate change, the government denounces.

With helicopters evacuating people stranded in the mountains of the north and boats criss-crossing the flooded plains of the south, Pakistan continues to mobilize all its resources to help the millions affected by the worst flooding in its history.

A third of the country has been submerged by the monsoon rains, which have killed 1,162 people since June according to the latest balance sheet released on Wednesday, have swept away agricultural land essential for the economy and have destroyed or seriously damaged a million homes.

“Pakistan is awash in suffering. The Pakistani people face a cataclysmic monsoon”, said UN Secretary-General Antonio Guterres, launching a request for donations of 160 million dollars for the next six months on Tuesday.

More of 33 million people, one in seven inhabitants, has been affected by the “worst floods in the history of Pakistan”, in the words of Prime Minister Shehbaz Sharif.

His government estimates that it will need at least $10 billion to repair massive damage to infrastructure, particularly telecommunications, roads and agriculture.

But the priority is to attend to the thousands of people blocked in the mountains and valleys of the north and in the isolated towns of the south and west.

“These floods are the worst in the history of Pakistan,” insisted Shehbaz Sharif. “People are homeless, they need food, medicine, drinking water. And this catastrophic situation has led to a very bleak economic situation. These floods have increased our burden.”

The rains have destroyed or severely damaged more than a million homes and devastated large swaths of economically vital farmland. “I solemnly promise that every penny will be spent transparently. Every penny will go to those in need,” he added.

“To those who suggest that this is the result of a lack of planning, I want to say yes, we will take responsibility as the country with the hottest cities in the world. But we have the largest number of glaciers after the polar regions. And they are melting very fast, he warned. This year there is three times more water in the lakes, which causes flooding, “rehman emphasized.

This monsoon season, Pakistan has received twice as much rain as usual, according to the weather service. In the southern provinces of Balochistan and Sindh, the most affected, the average of the last 30 years quadrupled.

The monsoon, which usually lasts from June to September, is essential for the irrigation and replenishment of water resources in the Indian subcontinent.

But it had been at least three decades since Pakistan had experienced such strong and sustained rainfall, something that those responsible blamed on climate change, which increases the frequency of extreme events.

This year, The country has already experienced a heat wave with temperatures above 50 ºCdevastating fires and catastrophic floods caused by the rapid melting of glaciers.

Very dependent on its agriculture, Pakistan expects serious consequences for a precarious economy that is already feeling the first consequences of the disaster, with an explosion in the prices of food products such as onions, tomatoes or chickpeas.

The United States announced on Tuesday a shipment of 30 million dollars of humanitarian aid. Cargo flights from China, Turkey or the United Arab Emirates also began to arrive.

Makeshift camps have appeared everywhere to accommodate the displaced, who must endure the intense heat and the scarcity of drinking water and food.

With information from Sonia Ghezali, RFI’s correspondent in Pakistan, and AFP.

Bruce Willis' Wife Emma Opens Up About Coping With Grief