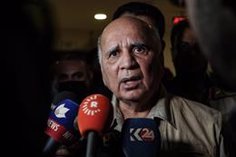 The Iraqi authorities have demanded that Turkey “officially apologize” and “withdraw its military forces” from Iraqi territory after the death of nine tourists in an artillery attack blamed on the Turkish Army against Zajo, in the semi-autonomous region of Iraqi Kurdistan. (north).

The Iraqi National Security Council has held a meeting headed by the prime minister and commander in chief of the Armed Forces, Mostafá al Kazemi, in which he has shown his rejection of “the land of Iraq being a platform to attack other countries or a scenario for reckoning”, before emphasizing that “it firmly rejects the presence of terrorist organizations or armed groups in its territory”.

Likewise, it has condemned “in the strongest terms” the “brutal Turkish attack” against “innocent civilians” in a tourist resort in the province of Duhok, an incident that also resulted in more than 20 injuries. The body has criticized that Turkey has “ignored” Iraq’s “continuous requests” to “end its violations against Iraq’s sovereignty and the security of its citizens.”

For this reason, he has asked the Ministry of Foreign Affairs to prepare a document compiling “the repeated Turkish attacks against the sovereignty of Iraq and the security of Iraqis” and to “present an urgent complaint in this regard to the United Nations Security Council” , according to a statement released by Al Kazemi’s office.

The agency has also demanded that the Turkish ambassador in Baghdad be summoned to transfer an official protest and has requested that the Iraqi charge d’affaires in Ankara be called for consultations, in addition to suspending the procedures for the appointment of the new ambassador of the country in Turkey.

Finally, the Iraqi National Security Council has asked the Joint Operations Command to present a report on the situation on the border and to “take all necessary measures for self-defense”, before advocating “coordination” with the authorities of Iraqi Kurdistan to “take decisive action to prevent violations”.

Al Kazemi himself stated on Wednesday that Turkey’s “brutal attack” is “an explicit and flagrant violation of Iraq’s sovereignty”, before insisting that Baghdad “reserves the right to respond”. For its part, Ankara has rejected the accusations from Baghdad and has stated that the attack would have been carried out by the Kurdistan Workers’ Party (PKK), which has disassociated itself from what happened and has charged against the Turkish Army.

Added to the sentences were the president and prime minister of Iraqi Kurdistan, Nechirvan Barzani and Masrur Barzani, respectively, who did not attribute responsibilities and criticized “the continuous clashes between the Turkish Army and the PKK – which Ankara considers a terrorist organization – – in the border area”. For this reason, they called for the end of these combats.

The spokesman for the US State Department, Ned Price, also condemned the attack and stressed that “the death of civilians is unacceptable.” “All states must respect their obligations under international law, including the protection of civilians,” he said, according to a statement posted on the State Department website.

“We convey our condolences to the families of the dead and our sympathies to the injured. We maintain our strong support for the sovereignty of Iraq and its security, stability and prosperity, including those of the Kurdistan region,” he concluded.

Turkey announced in mid-April the start of a new offensive against the PKK in Iraqi Kurdistan, in northern Iraq, which was described by Baghdad as a “national security threat”, given that the operations were not being coordinated. . The Turkish Army has also repeatedly carried out military operations against the PKK and its allies in northern Syria since the ceasefire between the Government and the armed group was broken in July 2015.