Arcanine in real life? Fan transforms his dog into the Pokémon and goes viral 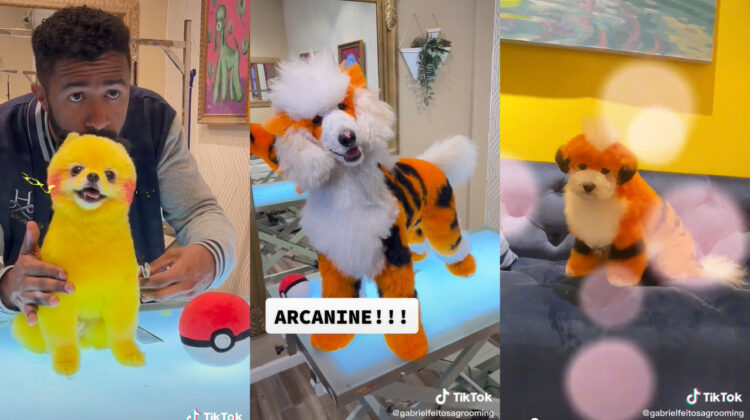 In recent weeks cats have given much to talk about thanks to straybut naturally, the spotlight had to return to the dogs and precisely today we will tell you about one that is attracting a lot of attention after it was transformed into the Pokémon Arcanine.

You read that right, there’s a fan of Pokemon who is also a dog groomer who decided to transform his dog (poodle or poodle breed) into an Arcanine, the Legend Pokémon, which is inspired by the legendary creatures of Japanese Ryukyuan folklore, which evoke the shape of a lion or a dog, although its stripes are reminiscent of those of a tiger.

The stylist we are talking about is Gabriel Feitosa, who is internationally known for his professional work in dog haircuts, styling and styling in general. Through his TikTok account, the Brazilian dog groomer shared several videos in which he is seen transforming his dog Edea into Arcanine and the result is surprising not only because the size of the 8-month-old dog is close to from Arcanine, but also because the final dye job is true to the fantasy creature’s design.

Stylist Gabriel Feitosa has also transformed a dog into Pikachu

It is important to mention that the hair coloring of dogs carried out by Feitosa is known as styling or creative canine haircut, in which a dog’s coat is subjected to a dyeing process with permanent substances developed for pets and that They are vegan and non-toxic.

Feitosa is an expert in the field and if you visit his profile you can find a lot of videos that show his skill. In fact, there’s one where he’s styled poodles like a Pikachu and a Growlithe and has straightened their hair in others. Something curious is that apparently Feitosa has not stylized a dog as a Furfrou, based on the puddle and Afghan hound breed and whose characteristic in the game is that it can precisely change haircuts.

Likewise, Feitosa took advantage of the video to demonstrate that creative styling does not affect the dog’s ability to socialize, but rather they can be happy just like any other next to other dogs or even humans.

In case you missed it: TikToker found some abandoned experts in nintendogs and helped them.

What did you think of Arcanine in real life? Tell us in the comments.

You can find more news related to Pokemon if you visit this page.

Rosalía and Karol G wear a change of image