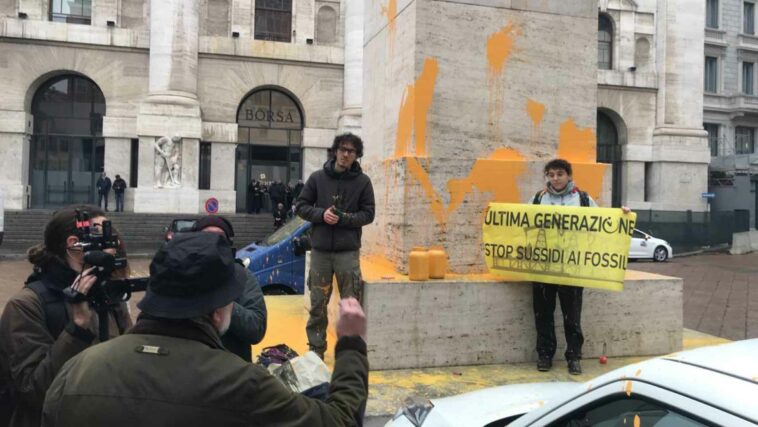 Ecological activists from the collective ‘Ultima Generazione’ (Last Generation, in Spanish), protagonists of some protest acts in recent weeks in Italy, threw this Sunday painting against famous sculpture by the artist Maurizio Cattelan. The damaged work represents the raised middle finger and is located in front of the Stock Exchange buildingin Piazza Affari in Milan, a city in the north of the Mediterranean country.

The action was carried out this Sunday morning, as reported the Italian Police. The security forces have intervened and three young men have been arrested, who were sent to the police station for identification and possible complaint. Activists have launched washable yellow paint to the sculpture known as ‘El Dedo’ and displayed a banner with the message ‘Stop fossil fuels and against the Italian banks that finance the current energy system’.

‘Last generation’ is an environmental group that He has already staged several protests in Italy. On December 7th they also poured paint into the La Scala theater facade in Milan and a few days ago against the seat of the senate, in Rome. His actions are in line with others focused on the same issue, such as attacks on paintings in museums or blocking roads.

For this we soaked the sculpture of Cattelan with washable varnish.

In this case, the painted work has been one of Maurizio Cattelan, a controversial author. The artist mounted another that simulated a meteorite falling on John Paul II. ‘The Finger’ was placed in 2010 in front of the Milan Stock Exchange and represented a hand trying to do the roman salute, but with the fingers cut off. Thus, only the middle finger remains raised in a gesture against a palace built during fascismbut also symbolizing economic power.

It was baptized as LOVE by the artist and raised the controversy. The architect Stefano Boeri, Milan’s councilor for culture at the time, decided to leave it in this place. some representatives politicians have condemned the action. The League leader and Transport Minister Matteo Salvini has stated: “These pseudo-environmentalists vandalized another work of art in Milan: these They are not environmentalists, they are vandals They deserve to go to jail.” 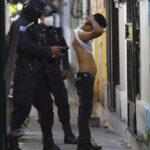