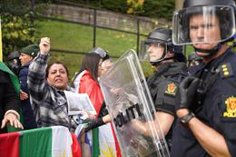 The NGO Amnesty International has blamed the security forces for systematically perpetrating abuses against those who have come out to demonstrate in recent weeks, following the death of a woman, Mahsa Amini, after being arrested for wearing the wrong veil, and has called for an international investigation.

The analyzes carried out by Amnesty itself, which has examined the wave of mobilizations that began after the death of Amini on September 16, has detected an indiscriminate use of force by the Police, who have resorted to live fire and pellets , as well as beatings against protesters.

The organization also includes within this pattern of abuse cases of sexual violence against women and the deliberate closure of Internet services, which has limited the possibility of the population to communicate at a key moment.

The secretary general of Amnesty, Agnès Callamard, has stressed that “the voices of the brave citizens of Iran who are desperately crying out for international support should not be ignored”, in a context of “systematic impunity” and repression of any hint of dissent. .

The latest protests, in which women have had a great weight, “have triggered an unprecedented national revolt”, according to Callamard, who asks for more than “empty words” so that the violence ends now and those responsible are held accountable. . “An international mechanism must urgently investigate the deaths of protesters,” she stressed.

A witness who participated in a demonstration in Tehran last Sunday told Amnesty that the police fired at the demonstrators and dealt them all kinds of blows. “The security forces took no mercy on anyone,” he said.