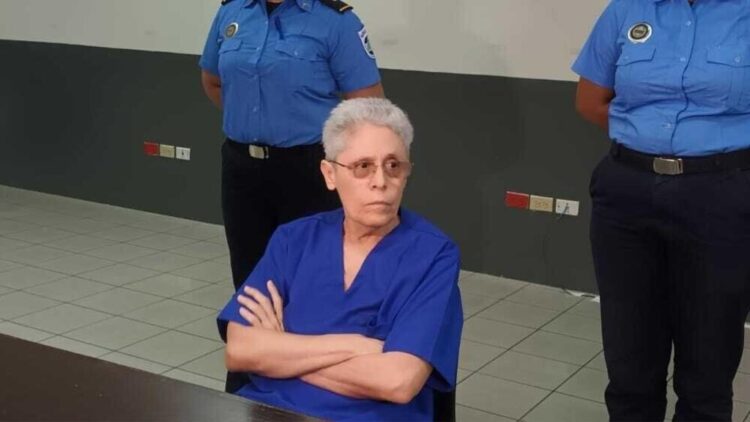 The director for the Americas of Amnesty International (AI), Erika Guevara Rosas, accused the Nicaraguan government of publicly exhibiting political prisoners detained for more than a year for the first time to send a message of intimidation to any of their opponents. Her statements came after the dissemination of images of around 20 detainees during a hearing in which some of them are seen with signs of malnutrition, the human rights group described.

Signs of malnutrition, wear and obvious physical damage. This is Amnesty International’s description of a dozen Nicaraguan political prisoners who were exhibited for the first time on Wednesday, August 31, after more than 15 months in detention.

The images were broadcast by the state media during a “judicial hearing” of those who already have a conviction.

Among them are the former Sandinista guerrilla commander Dora Maria Tellezas well as former presidential hopefuls Juan Sebastian Chamorro, Medardo Mairena Y Michael Morawho were arrested before the November 2021 elections. In those elections, President Daniel Ortega was re-elected for a fifth term, the fourth in a row, amid international questioning.

Amnesty International denounced that it was a maneuver by the Ortega regime to send a warning message to its detractors.

“They use these people as an example so that no one dares to raise their voice in Nicaragua,” said the director for the Americas of Amnesty International (AI), Erika Guevara Rosas.

Since mid-2021, a group of 46 opponents and critics of Ortega have been arrested and charged with crimes such as “undermining sovereignty” or money laundering. This year they received sentences of up to 13 years.

Ortega, 76, in power since 2007, accuses them of plotting to overthrow him with the help of the United States.

Warning or attempt to “wash your face”?: the interpretations of the controversial images

The official newspaper ‘El 19 Digital’ justified that the prisoners were presented so that the judges inform them about how their appeal or cassation resources are.

But the Nicaraguan Center for Human Rights (Cenidh) denounced that to expose the prisoners Managua resorts to a criminal procedure that “does not exist”, such as the so-called “informative hearings.”

The Cenidh recalled that all the detainees were notified of their sentence, which was ratified by the appeals court, and that the appeals for revocation would be processed in the Supreme Court of Justice.

Given what happened, the human rights defender Pablo Cuevas, exiled in the United States, considered that the presentation of the prisoners is “pure show” and questioned the quality of the food they receive judging by “their physical state.”

After an unusual day of exhibition of images, 20 prisoners of conscience were presented from the media related to the regime is a synchronized act. Wear and tear is more apparent in some of the peoplehttps://t.co/XSu36FSmyK

For its part, the Nicaraguan newspaper ‘La Prensa’ highlighted that by showing the detainees shaved and wearing blue suits, the authorities wanted to show “a good appearance”, as part of the official propaganda that tries to “wash its face”.

Despite the effort, the images reveal the physical and emotional deterioration suffered by political prisoners, assured the media outlet, which underlined with comparisons that the effects are more noticeable in some of the prisoners.

The controversial images were released surprisingly just after relatives of those arrested denounced that the food rations in the dreaded El Chipote prison, where they are being held, were cut to “extremes incompatible with life.”

For this reason, there are those who indicate that the Ortega Administration seeks to discredit the accusations of the families, who insist that there are poor confinement conditions and deterioration of the detainees’ health.

Police sources quoted by the newspaper ‘El País’ of Spain indicated that an alleged “hunger policy” was also established since last August 19, when the priests who accompanied Monsignor Rolando Álvarez in the Curia of Matagalpa were captured.

According to Managua, that diocese was being investigated for inciting “hate” to “destabilize the state.”

Since April 2018, Nicaragua has been going through a political and social crisis that has worsened after the controversial general elections on November 7.

Russia opens joint military exercises with its allies, including China and Belarus