What are the challenges of the Andean Community under the new Peruvian Presidency? 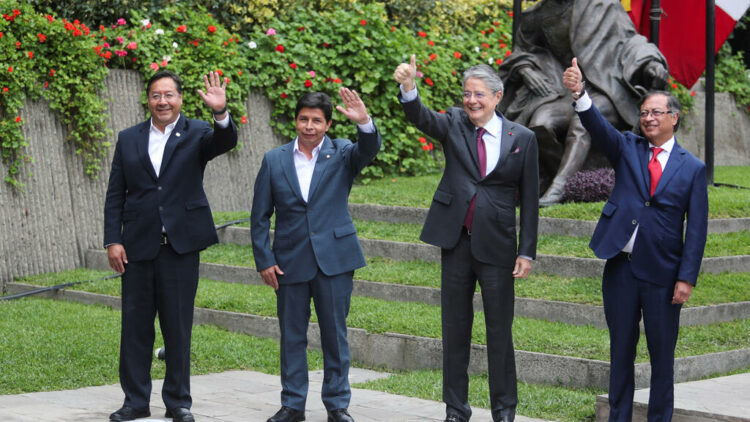 The Andean Community (CAN) held its 22nd Meeting of the Andean Presidential Council on August 29, in which the Latin American leaders showed their willingness to deepen their integration under the annual Presidency assumed by Peru.

Ecuador passed the baton to Peru in the Pro Tempore Presidency of the Andean Community of Nations, with a meeting held this Monday in Lima, between the presidents of Peru, Colombia, Ecuador and Bolivia.

At its 22nd Meeting, the highest body of the Andean Integration System seeks to strengthen itself and become more important as a body, rethinking and redesigning economic processes, in order to achieve substantial improvements in performance measures.

“I believe that the Andean Community is in a very difficult situation, and an example of this is that once again at this summit the word ‘reengineering’ has resurfaced. If one remembers the 2019 summit for the 50 years of the CAN, there was also talk of an ‘institutional reengineering’, and in the last meetings that took place in the last two decades, on several occasions the word ‘reengineering’ appeared, which it denotes that the CAN, although it serves many interests of its member countries, would not be fulfilling its main objective, which is to serve or become a supranational integration mechanism. And that is where the Community has major deficiencies that have made it fall into the background of regional importance”, explains Óscar Vidarte Arévalo, a Peruvian political scientist, an expert in international politics and a professor in the Department of Social Sciences at the Catholic University of Peru.

So, what would be the main issues of the regional situation, and the objectives and alliances that will be most urgent? According to the expert, “it would be to introduce social issues on the agenda. There has been talk of environmental issues, gender, etc. In addition, it should also be added that the Peruvian foreign minister has spoken of doing everything possible so that Chile and Venezuela, for example, return to the Andean Community in some way, in order to strengthen an institution that is somewhat weakened.

“The central issue, which is the most sensitive issue and which is sometimes difficult to mention, is the issue of supranationality and integration, right? How to make the four countries transcend the discourse? Because in the discourse everything is possible, and therefore they are committed to building greater integration, greater supranationality, and strengthen the mechanisms that exist. For example, an Andean Parliament that is highly questioned, an Andean Court of Justice that is highly questioned, which are precisely fundamental institutions of the integration process”, underlines Vidarte Arévalo.

The Andean Community, formerly known as the Andean Pact or Andean Group, is an international political body created in May 1969 through the Cartagena Agreement, whose main objective is to improve the quality of life of the 111 million citizens who live in the region.