US House of Representatives approves billion dollar Democratic initiative, a victory for Biden 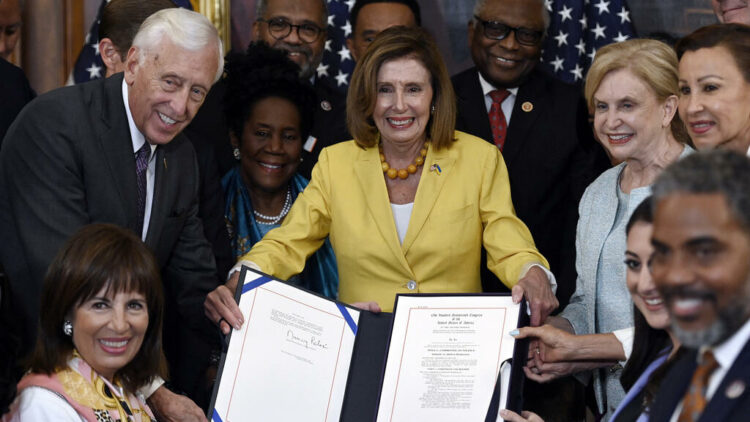 The final approval will be given by President Joe Biden, who will make it effective with his signature. The bill passed after nearly nine hours of discussion in the Democrat-dominated lower house. For their part, the Republican congressmen accuse their counterparts of using it as a key electoral piece for the mid-term elections, which will take place on November 8.

Considered Biden’s biggest victory since he came to the White House, the Democratic-controlled US House of Representatives approved a $430 billion package on Friday with the aim of combating climate change and reducing the price of some medications, among other extremes.

Known as the “Inflation Reduction Act”, this was approved with 220 votes in favor and 207 against, a considerable difference considering that in the Senate it passed by a difference vote, that of Kamala Harris, vice president of the Executive and also president of the Upper House.

To finance the bill, the Democrats are committed to reinforcing the collection of taxes, such as 15% for companies that earn profits of more than 1,000 million dollars. They also made it clear that there will be no more charges on people earning less than $400,000.

Reactions to the approval of the law

Biden was quick to react. On his Twitter account, the president stressed that with this victory “the American people have won and the special interests have lost. With his passage, families will see lower prescription drug prices, lower healthcare costs and lower energy costs. I am looking forward to ratifying it next week.”

With the passage of the Inflation Reduction Act in the House, families will see lower prescription drug prices, lower health care costs, and lower energy costs. I look forward to signing it into law next week.

This was not the only reaction of weight.

“This legislation (…) marks the beginning of the new phase of the economic future of the United States,” he said.

For his part, Republican Congressman Michael Burgess did not hesitate to criticize the initiative: “It will increase federal spending and that is what triggers inflation in the first place,” he concluded.

This approval is considered a major victory for President Biden, a few months before the mid-term elections, which will be held on November 8 and in which the entire Senate and a third of the House of Representatives will be renewed.

The Republicans did not hesitate to confront their discomfort in the middle of the discussion.

Congressman Tom Cole accused the parliamentary majority of “creating the illusion of doing something positive before the elections”, while the leader of the minority in the House, Kevin McCarthy, recalled that in the face of a hypothetical Republican victory “a new Congress with a new plan to change things.”

But despite the fact that President Biden’s approval rating has been below 50% since August 2021, there are several chain factors that have won support for the Democratic Party.

Among them, the death of the leader of Al Qaeda, the inflation law, the approval for the manufacture of microprocessors or the drop in inflation by six tenths, among others. Now, November has the last word for the US Legislature, which will mark the second half of Biden’s term.

With Reuters and EFE