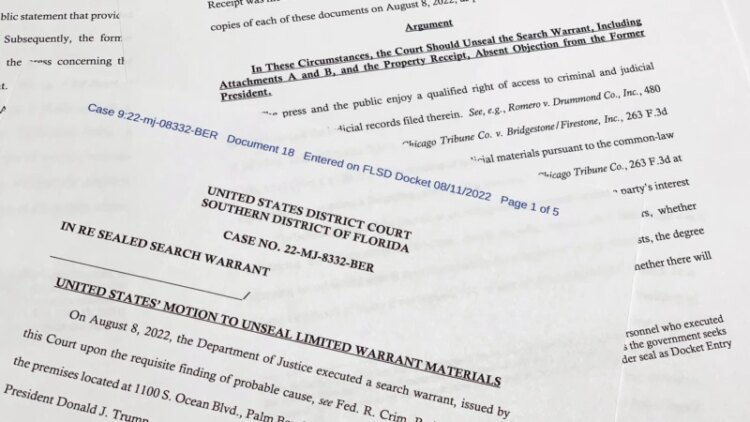 Lawyers for former US President Donald Trump informed the government Friday that they will not object to public disclosure of a search warrant at his Florida residence, the Justice Department said in a court filing.

The decision to release the order now rests with Judge Bruce Reinhart, the same one who signed the record. Earlier Thursday, Attorney General Merrick Garland declared there was “substantial public interest in the matter” and Trump backed “immediate” release of the search warrant.

Although the specific details are still unknown, the newspaper Wall Street Journal anticipated this Friday that FBI agents removed 11 groups of classified documents at Mar-a-Lago on Monday, including some marked “top secret.”

According to the newspaper, a list of what the FBI seized includes about 20 boxes with items, photo albums, a handwritten note and executive clemency granted by Trump to his ally Roger Stone. Information about the “president of France” also appears on the list, the WSJ said.

On the other hand, the chain foxnews reported that agents had the authority to seize “all physical documents and records constituting evidence, contraband, proceeds of crime, or other items illegally possessed” in violation of U.S. Code, including documents marked classified and presidential records created between the January 20, 2017 and January 20, 2021.

In a statement Friday, Trump claimed the documents seized by FBI agents were “all declassified” and said he would have turned them over if asked by the Justice Department.

Trump also denied a report by the Washington Post that the FBI searched Mar-a-Lago for possible classified materials related to nuclear weapons.

While sitting presidents have the power to declassify information, that authority ends as soon as they leave the White House, and according to the agency Associated PressTrump withheld many documents despite multiple requests from federal agencies, including the National Archives.

Disclosure requests from the Department of Justice are rare, because such documents are traditionally kept sealed during an investigation period. However, the department appears to have recognized that its silence since the day of the raid created a situation of verbal attacks from Trump and his allies and that the public has a right to know the FBI’s version of why the action was carried out in the house. Trump residence.

Pyongyang claims to have defeated Covid-19