They fight against a gigantic fire at the supertanker base in Matanzas, Cuba 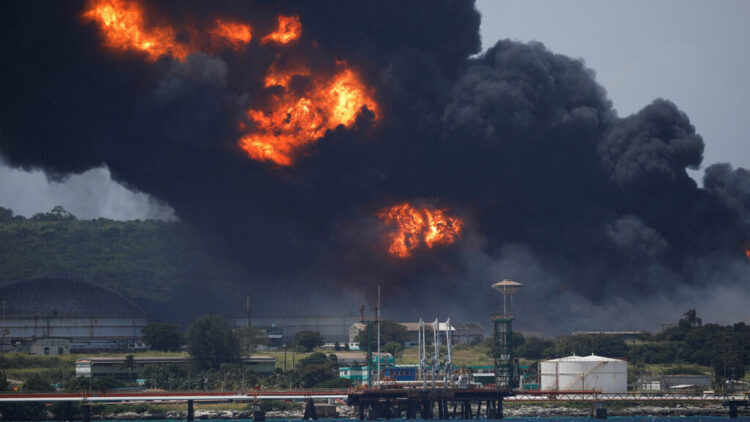 After the collapse of a second hydrocarbon tank this Sunday, firefighters are trying to control the fire at the fuel storage base in the Cuban city of Matanzas. The accident began on Friday when lightning struck a first tank, causing a fire that left at least one dead and 16 missing.

The fire spread to a second warehouse, out of a total of eight, and it collapsed this Sunday, August 7 at midnight. “Tank number 2 has just collapsed, it is not yet specified if the lid of tank 3 was thrown off with the explosion,” the provincial government of People’s Power of Matanzas reported on Facebook. Information confirmed by the Cuban presidency.

Authorities fear the fire could spread to a third tank. “The forces that worked in the place had been evacuated,” the provincial government said.

At least 16 people have been reported missing. These are “firefighters who were in the area closest” to the fire, the presidency reported on Saturday.

The remains of a firefighter were found after the collapse of the first tank at dawn, which contained 26,000 m3 of oil. 24 people have been hospitalized, five of them in serious condition.

Four Mexican planes and one Venezuelan plane landed about 40 kilometers northeast of Matanzas. The first plane of the Mexican Air Force arrived with 60 soldiers and 16 technicians from Petróleos Mexicanos (Pemex), followed by another with equipment and chemical products for fire control.

The King of Fighters XV will have Samurai Shodown DLC fighters