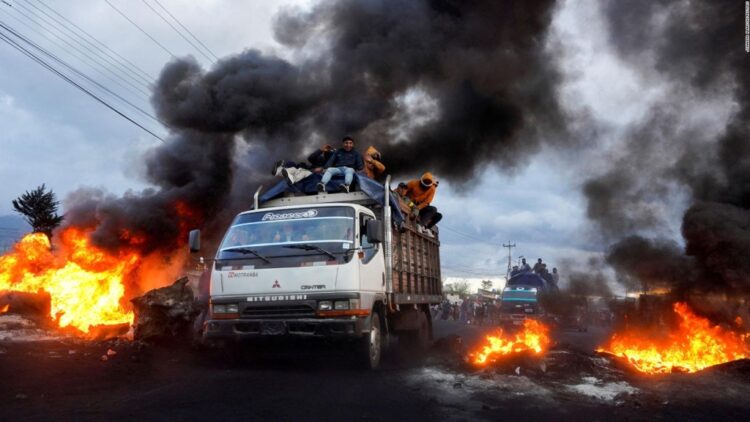 32
SHARES
230
VIEWS
Panama suffers the impact of the rise in gasoline 3:11

Bogota, Colombia () — South American countries are bracing for an autumn of discontent, as rising global fuel prices threaten to spark more protests in the coming months.

Rising fuel prices have already sparked protests in Argentina, Ecuador and Panama. Its neighbors could be especially susceptible to rising prices at gas stations, because the region lacks alternative modes of transportation, such as rail and waterways, more common in Europe and North America, and consumes less fuel.

“The price of fuel is an anchor for the entire economy: if fuel increases, it has a direct impact on all kinds of prices,” says Sergio Guzmán, director of Colombia Risk Analysis, a business consultancy in Bogotá.

To compound the problem, some sectors of the region need more fuel than ever, paradoxically to offset the effects of climate change.

In Ecuador, where bananas are the main agricultural export product, diesel pumps move water in and out of the plantations, a need that has become more urgent as the rains are increasingly intense in the country, analysts say.

According to Raúl Villacres of Pulso Bananero, a banana trade consultancy in Guayaquil, Ecuador’s banana production is down 7% compared to last year, in part due to rising diesel and gasoline costs.

Demonstrators protesting the increase in fuel and the cost of living in Quito, Ecuador, last month.

A similar situation is affecting the fishing industry in Colombia, where residents enjoy some of the cheapest fuel prices in the world. However, when the Ministry of Energy and Mines published the new regulated prices in early July, it caused a stir throughout the country.

Twice a week, fisherman Jimmy Murillo leaves the port city of Buenaventura, on the Colombian Pacific coast. He spends an average of two or three days at sea before returning with his catch, but lately the trips have gotten longer as fish stocks have dwindled and fishermen head further offshore to find fish. better prey.

Ironically, one of the reasons fish catches have declined is climate change, and fishermen like Murillo must use more fuel to mitigate its impact. One of the reasons, Murillo told , is that as rain patterns change and more torrential rains hit Colombia, rivers and streams reach the ocean carrying more sand and dirt in their waters, and because of that most of fish migrate further offshore, where the water is clearer and cooler.

Nicole Muñoz of Albacora, a small-scale sustainable fishing operation in Bogotá that moves around 400 kilograms of fish from the Colombian coast to the capital each week, also says that gasoline is key to her entire business model.

“We use fuel for the fishing boats, to move the product from the coast to the airports, and then on the planes, all our logistics depend on it,” Muñoz told .

Although fish prices have not increased as much as those of other food sectors in Colombia, such as beef and poultry, Muñoz believes that prices will start to rise as the impact of higher fuel prices is felt.

In April, the World Bank revised its growth forecast for Latin America and the Caribbean to 2.3% this year, cutting it 0.4 percentage point due to the impact of the war in Ukraine and the overall rise in world prices. At the same time, the Bank estimated that Latin American countries have lost the equivalent of 1.7% of their GDP due to climate-related disasters in the last twenty years, and expects Latin American agriculture to be in the line of fire as the planet warms.

As daily life becomes more expensive, could the popular anger seen in Panama, Ecuador and Argentina spread to Colombia and other countries in the region?

In reality, it is not a question of “if”, but of “when”, says Guzmán, of Colombia Risk Analysis.

Guzmán argues that regional governments will not be able to spend enough to mitigate the rising cost of living and pacify their populations. “As pockets tighten, people will lose patience, not because of anything governments do, but because these countries don’t have the capacity to increase social spending.”

Demonstrators clash with police in Quito, Ecuador, on June 23, 2022, during a protest against high fuel prices and rising cost of living.

Ecuadorian President Guillermo Lasso, for example, has been forced by protests to limit the price of gasoline to $2.40 a gallon, a decision that will cost the country an additional $3 billion by the end of the year. according to the Minister of Economy, Simón Cueva.

In Argentina, where the country’s economy minister has been forced to resign due to extreme inflation, a food delivery man from Buenos Aires told that the year so far had been more acrimonious than the early years of the pandemic.

“Everyone complains,” Federico Mansilia, a father of two, told . “Those who receive social support because they say it is not enough, and those who do not receive it because they want social support. At least during the pandemic, the government and the opposition worked together, now the polarization and rancor are growing again.”

The only hope for a moment of national unity, Mansilia says, is for Argentina to win the World Cup in Qatar at the end of the year.

“Now that’s going to bring the country together. If we win, everyone will be happy, there won’t be inflation and gas prices to bother us. But right now, things are pretty bad.”

Qualcomm will hold the Snapdragon Summit from November 15 to 17