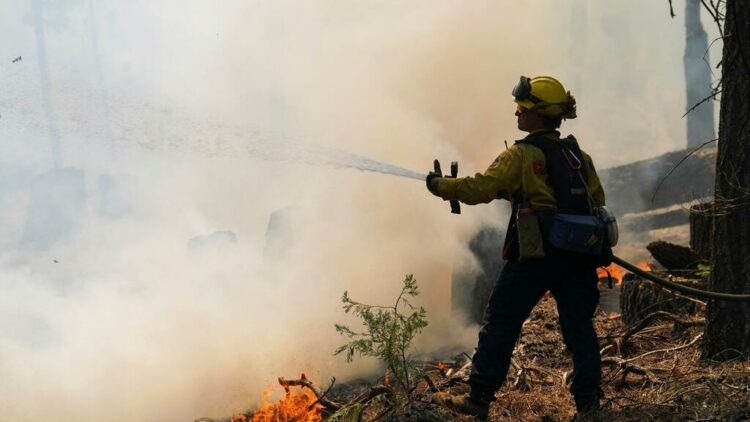 Record heat temperatures are recorded in the United States, especially in the state of California where a forest fire broke out that devastated thousands of hectares, forcing the authorities to carry out a rapid evacuation of residents living near the affected area.

Record heat temperatures in California have been the cause of several forest fires since Friday, such as the great Oak fire, in Mariposa County, in central California, on the outskirts of Yosemite National Park. The flames continued their destructive path on Saturday, burning more than 2,428 hectares and forcing the evacuation of rural communities.

The fire, described by officials as “explosive”, initially affected 250 hectares and covered 4,800 hectares in 24 hours. The fire in Mariposa County has already destroyed 10 properties and damaged five others, according to a Saturday bulletin from the California Department of Forestry and Fire Protection.

More than 6,000 people have been evacuated, according to Héctor Vásquez, from the Department of Forestry and Fire Protection, while the fire continued without control on Saturday night. For his part, California Governor Gavin Newsom declared a “state of emergency” in Mariposa County, citing “conditions of extreme danger to the safety of persons and property.”

The fire has left ash, damaged vehicles and twisted remains of property in its wake as emergency personnel work to evacuate residents and protect structures and homes. More than 500 firefighters are working to extinguish the flames and are being assisted by a plane, Vásquez told AFP, adding that the situation remains “really challenging”.

According to University of California climatologist Daniel Swain, the fire “spread in almost all directions,” “in a context of high fuel load and extreme drought.”

The west of the country has already experienced wildfires of exceptional magnitude and intensity in recent years, a trend that scientists attribute to global warming. Evidence of global warming could be seen in other parts of the country as more than a dozen states were under heat wave warnings.

“Extreme heat will continue across the central United States and spread into the Northeast this weekend, with numerous records expected across the region on Sunday,” the National Weather Service (NWS) announced. Higher temperatures will increase the threat of “violent weather events” such as hail, winds and tornadoes in the upper Midwest, it added.

The sweltering heat was felt particularly in the capital, Washington, where temperatures were approaching the symbolic 100-degree Fahrenheit (37-38 Celsius) bar. New York was not spared, with temperatures approaching 35 degrees. The temperature could also reach 43 degrees in parts of Utah (west), Arizona (south) and the Northeast, according to the NWS. In Boston, Mayor Michelle Wu declared a “heat state of emergency,” announcing that municipal cooling zones and swimming pools will be open longer.