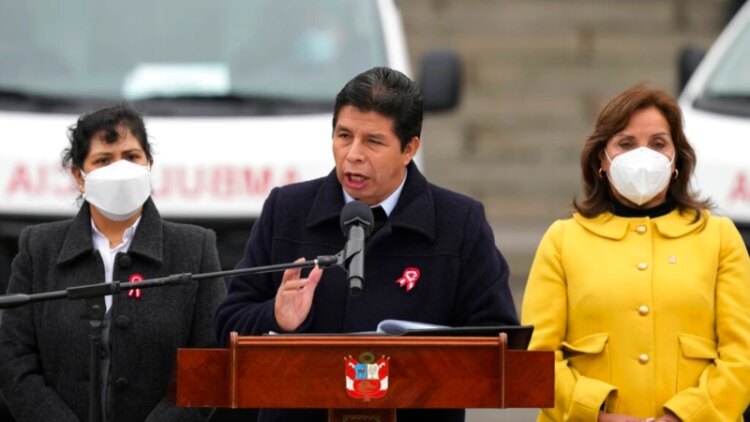 LIMA – A week after completing a year in power, the leftist Peruvian president, Pedro Castillo, faces another political crisis. This situation is due to the fact that he decided on Tuesday night to dismiss the Minister of the Interior, Mariano González, who had created a special team of the National Police to capture people close to his environment involved in corruption cases and who are found not to have been such as: the former presidential secretary, Bruno Pacheco; the former Minister of Transportation, Juan Silva; and the president’s nephew, Fray Vásquez. All of them have been more than 100 days without being located.

González was the sixth holder of the Interior portfolio of this government. He was placed in that position due to his experience as Defense Minister in the Pedro Pablo Kuczynski administration (2016-2018). In recent months, his name had been mentioned to integrate a position within the Executive. After his abrupt departure, the former minister said in an interview with a television channel that President Castillo has to leave the government as soon as possible by “having a commitment to corruption.”

“For every decision he made, there was an ice law from the entire government environment. The president, the advisers to him. Today I have no doubt that Mr. (Castillo) is committed to corruption,” said González.

“Pedro Castillo does not deserve to be in government for another day. Congress must make its decision, I hope it does. If he doesn’t do it, the street will do it for everyone,” he assured. The former Minister of the Interior indicated that the government wanted to place close advisers within the special team of the National Police.

President Castillo responded to González’s accusations. “Recently we were in Ayacucho, I made a call to the ministers of State and told them that the minister who does not work has to go to his house. Today we are in this scenario, and when they have to say it, do not expect to leave the management (to talk) about the mistakes and acts that are committed within the administration and within the management. Say it inside, that what is said later does not make sense, ”he pointed out in a public activity.

In addition, Prime Minister Aníbal Torres pointed out that the outgoing official was dismissed because he did not present a plan to combat citizen insecurity in Lima and the country’s regions. In addition, Vice President Dina Boluarte, who occupies the portfolio of Development and Social Inclusion, called former Minister González irresponsible, whom she demanded to present evidence of his accusations against the government.

The political scandal reached the Congress of the Republic, where the opposition has begun to gather signatures to present a vacancy motion against President Castillo. This would be the third time because last December and March the 87 votes necessary to end the government were not achieved. In parallel, various business associations have published statements demanding that the head of state resign.

The National Prosecutor’s Office opened an investigation against Castillo for the alleged crime of cover-up after the complaint by former Minister Mariano González, who accused him of protecting fugitives from this government.

With this decision, it turns out to be the third investigation against the Peruvian president in the exercise of his functions. Days ago, investigations were initiated for the irregular tender for a bridge in the Peruvian jungle by the Ministry of Transportation and promotions in the Armed Forces.

According to opinion polls from companies such as IPSOS, the Institute of Peruvian Studies (IEP) and CPI, Castillo has a disapproval of around 80%.