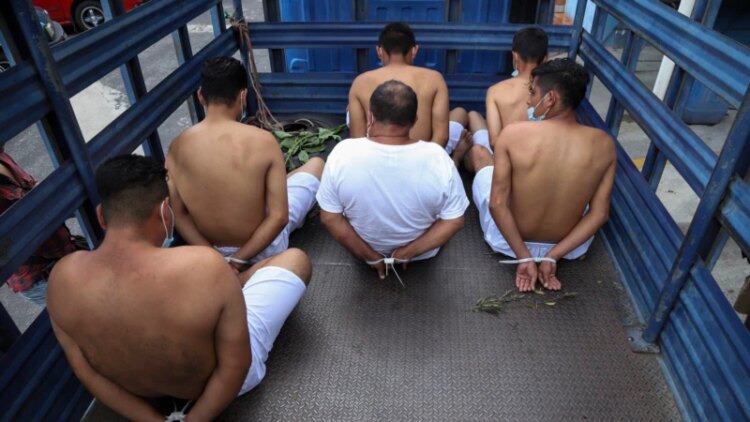 Six social organizations documented more than 3,100 complaints of human rights violations during the emergency regime decreed in El Salvador to combat gangs, which the government holds responsible for most of the crimes committed in the country.

According to these organizations, in addition to violations of the right to defense and due process, other violations are added such as the right to identity, dignity and privacy.

The report prepared by Cristosal, the Foundation for Studies for the Application of Law, the Passionist Social Service, the Salvadoran Network of Human Rights Defenders, AMATE and the Human Rights Institute of the José Simeón Cañas Central American University revealed that they had documented 3,186 cases since March 27 to July 31.

According to the complaints, more than 86% of the detainees are men between the ages of 18 and 30, but 12 trans women and three trans men have also been identified.

In a press conference, the representatives of the organizations also denounced that in April the security authorities disclosed the photographs of two detained trans women, bare-chested and without using the name by which they identify themselves.

The state of exception was approved on March 27 by Congress at the request of President Nayib Bukele, after a wave of crimes that shook the country.

This regime limits freedom of association, suspends the right of a person to be duly informed of their rights and reasons for arrest and the assistance of a lawyer. In addition, it extends the term of preventive detention from 72 hours to 15 days and allows the authorities to seize the correspondence and cell phones of those they consider suspicious.

The measures have been widely defended by the government, but activists and members of the international community have questioned them as opening the door to human rights violations.

The organizations called on the Salvadoran State to watch over the rights of detainees, respect and protect the gender identities of trans people, comply with due process and investigate cases of chronic diseases and deaths in prisons or during detention. .

The attorney general, Rodolfo Delgado, revealed that they are investigating 17 deaths of inmates inside prisons, but he announced that he has information that “the deaths of these people are due to pre-existing health complications at the time of capture.”

For its part, the Office for the Defense of Human Rights confirmed that it has opened 28 files to investigate the deaths of prisoners during the emergency regime.

Since the state of emergency was approved, the security forces have arrested 51,241 people, most of them accused of being part of criminal structures or collaborating with gangs.

The Public Ministry reported that the judges have ordered the provisional arrest of 45,849 alleged gang members or collaborators.

The gangs are involved in drug trafficking and organized crime, but they also extort money from merchants and transport companies and kill those who refuse to pay, according to authorities.

Between January 1 and August 30, the police registered 514 homicides, 34% less than the 781 recorded in the same period of 2021, and public transport employers assured that since the emergency regime was implemented, extortions have lowered by 95%. They claim they paid the gangs between $12 million and $35 million a year.

Ukraine recommends evacuating the east and south before the cold arrives