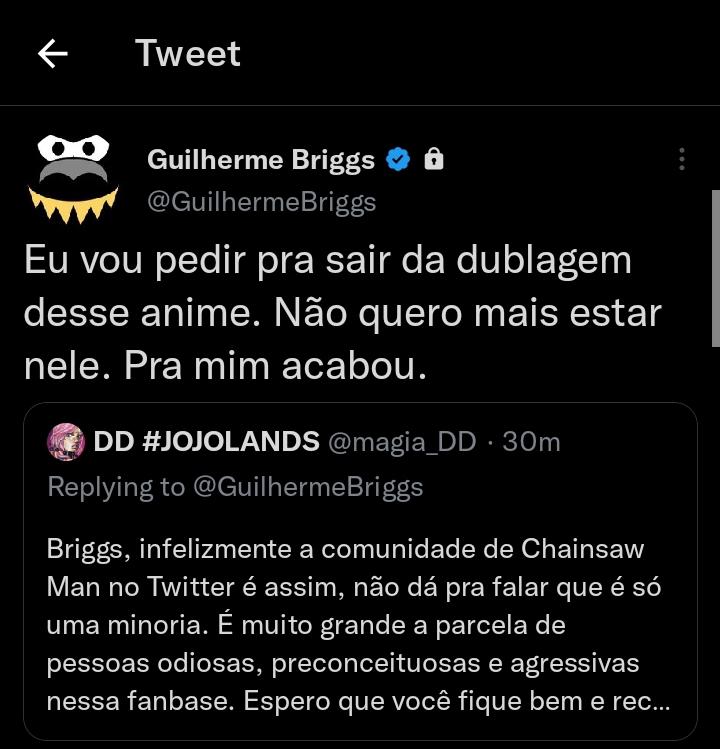 Unfortunately, many fans can be very toxic when something is to their dislike. Along these lines, the people involved in dubbing often receive criticism when the translation of a project does not meet the expectations of the community. This was discovered in the worst possible way by an actor from Brazil.

We are talking about Guilherme Briggs, a renowned actor with more than 30 years of career. He is famous for playing iconic characters like Buzz Lightyear in toy storyOptimus Prime in the live action tapes of transformerJack from the animated series samurai jackJoshep Joeastar from the anime Jojo’s Bizarre Adventure and many more.

The voice professional participated in the dubbing for Brazil of Chainsaw Man, the popular MAPPA anime. Unfortunately, in recent days it has been the target of numerous criticisms and other toxic attitudes such as criticism and harassment by a sector of the community. The reason? The fans are not happy with the translation of a dialogue.

“For me, it’s over” Actor will leave the dubbing of Chainsaw Man due to toxicity

According to the information, users expected that the official dubbing would use a phrase that became famous among members of the community thanks to unofficial translations of the manga. However, Guilherme Briggs, who plays the Demon of the Future, did not say the aforementioned sentence in the series, which generated the anger of many people.

The voice actor justified this decision, explaining that many translations made by fans are not used in official products. However, these explanations were unable to appease the discontent of a large section of the community.

According to reports, Guilherme Briggs has received criticism, negative comments and death threats since the episode’s premiere. Through a post on Twitter, he reported that he fears losing his Twitter and Instagram accounts, as he was recently the victim of a hacking attempt.

Immediately, the dubbing actor stated that he will ask to leave the dubbing of Chainsaw Man. At the time of writing these lines, his Twitter account is possibly blocked as a strategy to prevent future attacks against him. It is unknown if he actually left the project.

In case you missed it: “Don’t do it again”, fans open petition to defend Chainsaw Man

Unfortunately, actors around the world can be targeted by toxic fans. A few years ago, Arturo Castañeda and other personalities who participated in the new Latin Spanish dubbing of one piece They received a multitude of criticisms and threats against them. On the other side of the world, the actress Guiniang was the victim of harassment by Chinese players of Genshin Impact.

But tell us, what do you think of this situation? Do you know of any similar case?

You will find more news related to Chainsaw Man if you click on this link.