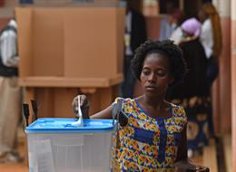 The main opposition party in Angola, UNITA, which this week announced that it would challenge the results of the elections held on August 24, although it has not dared to say that they were the winners, it has defended that “the MPLA does not won with an absolute majority.

“I am in a position to say that the result is not correct: the MPLA did not win with an absolute majority,” UNITA vice president Mihaela Webba said during an interview for the Portugal version of CNN.

Webba is confident that the decision made by the court regarding the lawsuit they will present will be “decisive”, especially with regard to the number of deputies they consider will correspond to UNITA after a new count. “That would remove the absolute majority from the MPLA,” she asserted.

UNITA’s vice president has also denied the CNE’s claims that they did not file any claims. “There was obstruction. We are going to appeal the electoral dispute together with the Constitutional Court”, she has advanced.

The decision on the appeal, he said, will be quick, since they have 72 hours to claim and the court has the same period of time to decide since the lawsuit is filed. “Then we will have the results of the elections,” she said.

“The most important thing is the votes that UNITA demands, especially in the electoral constituencies where there is a high number of voters, such as the cases of Luanda, Benguela, Huíla, and Cabinda”, he explained.

This week, the National Electoral Commission (CNE) confirmed that President Joao Lourenço’s Popular Movement for the Liberation of Angola (MPLA) won with 51 percent of the vote in elections marked by abstention. The 124 seats won are the worst result in the history of a party, which has monopolized national politics since independence from Portugal in 1975.

For its part, the National Union for the Total Independence of Angola (UNITA) achieved 44 percent of the support, which has been reflected in the 90 deputies, 39 more than in the appointment with the 2017 polls, which will have in the National Assembly unless the courts say otherwise.