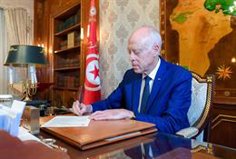 The Tunisian polling stations have opened their doors early this Monday for the celebration of a controversial constitutional referendum promoted by the president, Kais Saied, amid opposition complaints about the authoritarian drift of the president since July 2021 all powers will be arrogated.

According to information collected by the Tunisian news station Mosaique FM, more than 4,500 polling stations have been activated for the vote, to which nearly nine million Tunisians are called. The voting centers will close their doors at 10:00 p.m. (local time).

Tunisians residing abroad began to vote on Saturday, while the president of the Higher Independent Body for Elections (ISIE), Faruk Buasker, stated last week that the body hopes to publish the results between the 26th and the July 27th.

The Tunisian president has defended the draft Constitution and has stressed that it does not pose a risk to the rights and freedoms of the population, for which he encouraged citizens to vote ‘yes’, in the face of internal and international criticism for the ‘hyper-presidentialist’ model ‘ which drives the document.

The draft of the Magna Carta brings together most of the powers around the Presidency and reduces the power of Parliament, suspended in July 2021 –and later dissolved–, the date on which Saied dissolved the Government and arrogated all the competencies.

If approved in a referendum, the document will replace the Magna Carta approved in 2014 following the overthrow in 2011 of the then president, Zine el Abidine ben Ali, within the framework of a massive wave of popular protests in what is known as ‘Spring Arab’.

Twitter suffers a security breach and sees the data of 5.4 million users leaked