The opposition demonstrates again against the constitutional referendum in Tunisia 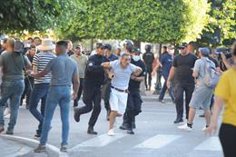 Hundreds of people have demonstrated again this Saturday in Tunisia to ask for abstention in the constitutional referendum scheduled for next Monday, July 25, and to protest against the self-coup of President Kais Saied.

The National Salvation Front, which brings together the opposition, took to the streets of the country’s capital this Saturday, considering that it is an anti-democratic and illegal process.

Many of the attendees were middle-aged citizens who have known the autocratic regime of former President Zine el Abidine ben Ali that fell silent in the Arab Spring uprising in 2011.

“I am here to fight for freedom and democracy. We cannot advance or have power in this world under a dictatorship,” said Amna Fehty, a supporter of the Islamist Ennadha party who attended the demonstration. “I don’t want to see our children live as slaves under the government of a dictator,” she stressed in statements to the Al Jazeera chain.

Saied suspended Parliament a year ago and dismissed the Government to assume all the powers of the State with the argument that he was satisfying popular demands and faced an “imminent risk” for the country.

“Kais Saied perpetrated a coup d’état. He has betrayed the Tunisian people who voted for him. He wants to be like a sultan,” said Alabbas ben Abdennabi, 22.

The demonstration on Saturday has developed peacefully, but in the protest on Friday there were arrests and violent police charges. Agents also used pepper spray.

The Tunisian president has defended the draft Constitution that consolidates the powers he already possesses and has stressed that it does not pose a risk to the rights and freedoms of the population, which is why he encourages citizens to vote ‘yes’.

If approved in a referendum, the document will replace the Magna Carta approved in 2014 following the 2011 overthrow of Ben Ali.