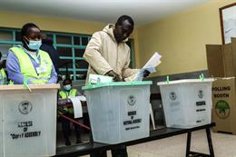 Kenya’s High Court will hear a petition for a ruling in the event of a possible victory for the country’s Vice President, William Ruto, in this week’s presidential election, in the face of accusations of irregularities in the candidacy of his running mate Rigathi Gachagua. , investigated for corruption.

The petition has been presented by a group of activists who have requested the annulment of Ruto’s candidacy for being accompanied by a citizen investigated for a crime.

“The file will be presented to the President of the Deputy Supreme Court for the formation of a court to hear and determine the request in the registry. The parties will be informed when the ruling will be delivered”, declared the assistant secretary of the superior court, Bernard Kasavuli, to the newspaper ‘The Nation’.

Both Ruto and Gachagua have asked the Supreme Court to dismiss the case, understanding that the court not only lacks jurisdiction to hear the case, but that the lawsuit is “incompetent and irremediably defective both in form and substance” and only seeks to exhaust in higher courts a petition that must first be resolved in lower instances.

Meanwhile, the country is still waiting for the final result of elections that pit Ruto against former Prime Minister Raila Odinga, a favorite in the polls and chosen in succession by the country’s outgoing president, Uhuru Kenyatta.

The European Union’s electoral observation mission in Kenya stressed this Thursday that last Tuesday’s general elections took place “peacefully” — a welcome exception to the violence that has rocked Kenyan elections in recent years — and fundamental rights were respected, although he considers that there is room for improvement in procedural matters.