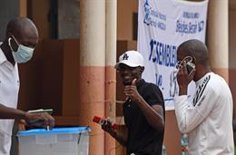 The Supreme Court of Kenya will decide from this Wednesday until next September 5 the appeal filed by the former prime minister and candidate in the last presidential elections on August 9, Raila Odinga, against the victory in those elections of his rival, William Ruto, who prevailed with 50.4 percent of the votes, according to the Electoral Commission.

Odinga’s defense has around six hours to present their arguments. His lawyers maintain that the results of those presidential elections are the product of a vote manipulation plan orchestrated by the Electoral Commission and the president-elect, William Ruto.

Relying on affidavits from witnesses, the plaintiffs maintain that the same number of votes that were annulled for Oringa were later added to Ruto. However, “the total number of votes cast remained the same,” explained one of the lawyers, James Orengo, reports ‘The Standard’.

Throughout the afternoon of this Wednesday, the appearance before the judges of Ruto’s legal representatives is scheduled. Meanwhile, the scrutiny and recount of votes from fifteen electoral colleges where the credibility of the final process was questioned is also underway in the same court.

A few days after Ruto’s victory was proclaimed, Odinga denounced that the president of the Electoral Commission, Wafula Chebukati, showed contempt for the Constitution by announcing the results processed unilaterally, while saying that they were “dictatorial” by the lack of transparency.

Odinga was referring to the position of four members of the Electoral Commission, including its vice president, Juliana Chereraque, who repudiated the results alleging that the figures announced were not logical.

Ruto won the Kenyan elections with 7,176,141 votes (50.4 percent), according to data released by the electoral commission. In this way, he narrowly prevailed over Odinga, who got 6,942,930 votes (48.85 percent). The announcement of the final result was delayed several times due to accusations of electoral fraud raised by the former prime minister, which caused a gradual increase in tension.

Twitter launches its version of 'close friends' for all users