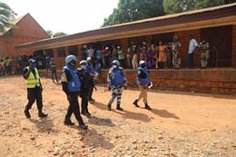 The leader of the military junta of Chad, Mahamat Idriss Déby, has signed this Monday in Doha, the capital of Qatar, a peace agreement with the rebel factions to start a transition process that will start on August 20, as planned. .

The parties have ratified the pact before the president of the African Union Commission, former Chadian prime minister Musa Faki, as well as dozens of senior officials from international organizations, although some of the main rebel groups have not been present.

The document includes a series of commitments, such as a ceasefire that comes into force from the signing of the text, the cessation of military operations by the Transitional Military Council, the beginning of the disarmament and demobilization process, the adoption of a law of amnesty for the rebels, the implementation of security measures, the renunciation of the armed struggle and the release of imprisoned combatants and members of the security forces, among others.

The Qatari authorities, which have sponsored the agreement, have stressed that it “reflects Qatar’s active role at the regional and international level” to “stop conflicts”, according to information from the Alwihda news portal.

The Doha agreement “will make it possible to form a common vision and a future for Chad,” said a senior Qatari official, who described the measure as an “achievement of national reconciliation in Chad.”

In this sense, the parties have advocated “carrying out a constructive dialogue to advance the negotiations”. “Qatar will not hesitate to accept the mediation that comes from the opposing parties,” he added.

The firm in question comes after five months of negotiations. Nearly 40 political movements –out of almost 60– have signed the document. “Today, five months later, we are witnessing the end of the dialogue between the Government and the armed movements”, Faki applauded.

For his part, the Secretary General of the United Nations, António Guterres, highlighted the Qatari mediation to carry out the agreement and congratulated the parties.

Solar eclipse from a spaceship