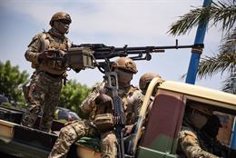 An armed group from Mali, belonging to the affiliate of Al Qaeda in the country, has claimed this Saturday the attack against the country’s main military base, in Kati, 15 kilometers from the capital, Bamako.

The subsidiary, Katiba Macina, has indicated that the attack that took place on Friday and that killed a soldier and wounded six people was a response to the government’s collaboration with Russian mercenaries from the Wagner group.

Previously, the Malian Army blamed this group for the incident.

The Army General Staff pointed out that the military “have managed to contain another desperate attempt by terrorists from the Macina Front –belonging to Al Qaeda’s affiliate in the country, the Support Group for Islam and Muslims (JNIM)– which have attempted kamikaze actions with two vehicles loaded with explosives”.

Thus, he stated that the incident with two car bombs was saved with a dead soldier and six wounded, including a civilian, while seven terrorists were “neutralized” and another eight were arrested.