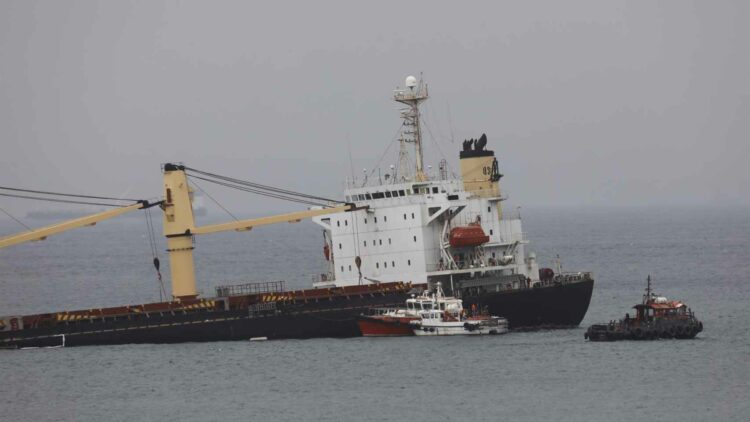 The OS 35the ship that collided on Monday night with a gas tanker in the Bay of Algeciras, and which has been immobilized by the Gibraltar authorities off the east face of the Rock, has begun to pouring hydraulic fluid into the sea as a consequence of the breach suffered in the hull by the collision.

According to sources from the Government of Gibraltar, the Gibraltar Port Authority has had to deal with the leak since Tuesday afternoon, originating in the ship’s bow crane, which is the only one of the four cranes on board the affected ship. by the ingress of water so far.

The Gibraltarian authorities they have deployed a sea barrier around the ship to contain contamination. To surround the structure of the crane, an additional absorbent boom has been installed, in order to minimize leaks at the source and contain and collect the fluid to prevent it from continuing to leak into the sea.

Collision of two ships in the Strait of Gibraltar


This technical and operational planning will continue throughout the night to ensure that any intervention is carried out in the safest way and with the least possible risk to the environment, and as soon as possible.

The ‘OS 35’, which navigates with 183 tons of heavy fuel oil, 250 tons of diesel and 27 tons of lubricating oil, It was leaving the Bay of Algeciras to go to Vlissingen, in the Netherlands, when it collided slightly with another boat.

Faced with the risk of sinking, Gibraltar led it to the east face of the Rock, where it has been beached and its bow is already submerged 1.2 meters in the sandy seabed, as a measure to avoid environmental damage.

IRAN Repatriations, torture, murders: the tragedy of the Afghans on the Turkish-Iranian route