The Palestinian health authorities have reported on Monday that a 14-year-old teenager is seriously injured after being shot during a series of clashes in the city of Bethlehem, in the West Bank, with the Israel Defense Forces (IDF).

The Israeli Army has indicated that the minor has been injured in the framework of an operation that has resulted in several Palestinians detained in a refugee camp in Dheisheh and accused of alleged terrorism.

“The suspects threw stones, explosives and Molotov cocktails at the members of the IDF, who have responded using dispersal measures,” the Israeli forces said in a statement in which they admitted to opening fire on those present.

For its part, the Palestinian Authority has regretted that the minor has been shot in the head and is hospitalized in critical condition, according to information from the WAFA news agency.

The SDF reported this Monday that there are a total of 19 Palestinians detained in a series of anti-terrorist operations carried out in various parts of the West Bank, where there have also been incidents and disturbances. 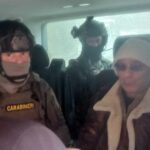