Ten people were killed and ten wounded in a mass shooting Saturday night at a dance club in east Los Angeles following a Lunar New Year celebration that drew thousands of people, police said Sunday. It was the fifth mass shooting in the United States this month.

Capt. Andrew Meyer of the Los Angeles Police Department said Sunday that the injured were taken to hospitals and their conditions are stable to critical. He added that all 10 people died at the scene in the city of Monterey Park.

The officer reported that people “ran out of the location screaming” when officers arrived around 10:30 p.m. Saturday. He said officers entered the ballroom and found victims while firefighters tended to the injured.

Meyer did not provide a description of the male suspect or the weapon he used, or why police did not release information about the shooting for hours while the shooter apparently remained at large. He also said police were investigating another incident in the nearby town of Alhambra, where a similar business, the Lai Lai dance hall, had police tape at the front door and was watched by an officer.

Detectives could be seen working near the open back door, where a gloved woman was carefully examining the door handle as if looking for prints. Authorities did not release details about what had happened and it was not clear if this was the incident that investigators were examining for a connection to the Monterey Park shooting.

Meyer said it was too early to tell if the shooter knew someone in the ballroom or if it was a hate crime. “We will look at all angles,” he said.

The event occurred at the Star Ballroom Dance Studio dance club, located on Garvey Avenue, in the center of Monterey Park where red lanterns decorated the streets for the Chinese New Year. A police vehicle parked nearby had a large sign reading “Happy Year of the Rabbit.”

Monterey Park is a town of about 60,000 with a large population of Asian origin and is located about 16 kilometers (10 miles) from downtown Los Angeles.

Seung Won Choi, owner of the Clam House seafood barbecue restaurant across the street from where the shooting took place, told the Los Angeles Times that three people ran up to his business and asked him to block the door.

Those people told Choi that there was a person with a machine gun who was carrying several rounds of ammunition so he could reload.

Wong Wei, who lives nearby, told the Los Angeles Times that a friend of hers was at the store when the shooting began. When she got out, she said, she saw an armed man and three bodies.

The friend then fled to Wei’s house around 11 p.m., she said, telling him the shooter appeared to be firing indiscriminately with a long gun. “They didn’t know why, so they ran,” she told the newspaper.

The White House said that National Security Adviser Elizabeth Sherwood-Randall reported the case to President Joe Biden, who asked the official that “the FBI provide full support to local authorities and regularly update it as it becomes Know more details,” said the presidency. 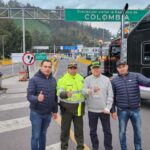